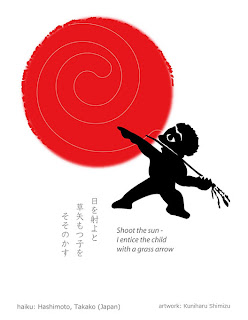 Haiku by Hashimoto, Takako. Artwork by myself.

Takako(1899~1963) was a well known woman haijin in Japan. Originally an painter, she took up haiku when she met Takahama, Kyoshi of Hototogisu haiku group. She also learned haiku under Yamaguchi, Seishi, and Mizuhara, Shuoshi. Since 1944, she lived near Nara city, which is not far from my hometown.
posted by kuni_san time: 10:16 AM

I am sorry Kuni-san, but i had to say...this in a way explains why a significant majority of the present generation is aimless...not knowing their strength or weaknesses...or of things they put to use,

No, no offence to the haiga or the authors...It depicts very well, and i love it, when a haiga makes me think and communicate....again, hope you don't mind, Kuni-san :)

i was sorry because, i was finding fault with the older generation....not a nice thing to do...but so often a reality,

Thanks for many comments, Devika san.
I was out to the last shopping.
I think there are a number of interpretations to this haiku. What I did was to visualize the scene of the haiku, rather than visualizing my own interpretation. It is difficult to pin point the intention of this haiku.

Well, a happy new year to you , too.
Feel free to write your comments for the coming year, too.

Thank you Kuni-san so much...i feel a little guilty sometimes because what i say may not be what some like to hear...but again the child is us is like irrepresible sometimes,

even me, i could see it is open to many interpretations...its a very effective haiga...and lovely artwork..a classic work...i'm no one to say, but that's what i felt

And thank you for the wishes, too, Kuni-san:)