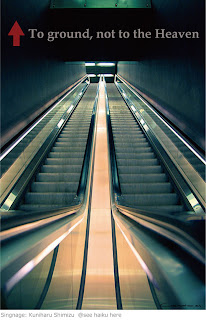 Signage words by Kuniharu Shimizu. Photo is from somewhere in internet.

I had a year-end party with a group of master Shodo-ka(Japanese calligrapher) tonight.
I showed off to them some of the haiga made by foreigners using sumi and ink in Japanese traditional style. To my surprise, they were not impressed, pointing out that the strokes in all the haiga were the ones by those who do not know the basics of calligraphy. They claimed that one need to be able to write calligraphy before start drawing some image with the same brush. They also had a question as to why the foreigners did not use thier own tools like pens and pencil, and other western tools they are so much more comfortable with. Haiga, they said, does not have to be done in old Japanese way, haiga is an art of poetry plus artwork of any style and any means.

I understand too, Kuni-san...am only admirer of short form poetry and art there in :)