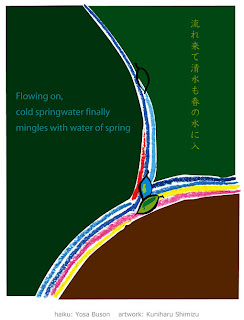 Haiku by Yosa Buson. Artwork & English translation by myself.
In the original Japanese haiku, Buson used kanji "shimizu" (literary clear water, but in translation "springwater"). The kanji is the same as my family name so I like the haiku immediately. And of course, the haiku itself is, I think, very haiku; simple observation of the nature, being inspired, sketching it, and resulting in a haiku with many layers of meaning.

Visualization took a while, in fact a whole afternoon, because although I made several attempts, each time there were some uncomfortableness remained in me, in another words I failed each time. In the end, however, Muse finally gave me a solution: focusing. I realized that there were unnecessary elements in the previous attempts. The subject is just the flowing water so I just focused on the flow, and concentrated on making the flow visually interesting.
posted by kuni_san time: 9:36 AM