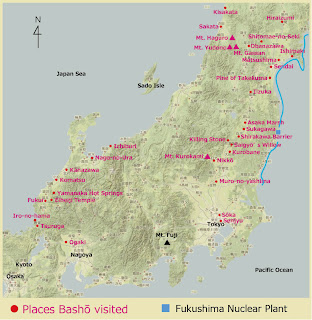 This is a map I made for haiga ebook of "Narrow Road to the Deep North" by Matsuo Basho. I added a blue square to the map, indicating where the Fukushima Nuclear Power Plant is. Blue line along the Pacific coast indicated where tunami struck. This line extends farther north, double the length.
(BTW: I live near Osaka and Kyoto. My wife is presently at a town near "Muro-no-Yashima" to check on her old mother)

In the area near here, Basho wrote haiku like:

Basho wrote on:
[The Shirakawa Barrier] "Day after day had passed in vague uneasiness; but now we approached the Barrier at Shirakawa, and, for the first time, I felt that our journey had truly begun. I could understand why the poet had felt at this spot that he wanted to send word to the people in the capital that he had crossed the Barrier.
As one of the Three Barriers to the north, Shirakawa has always appealed to poets and writers. Yet even as I delighted in the green leaves of the trees, an autumn wind seemed to sound in my ears, and crimson leaves danced in my mind’s eye.

[Sukagawa] "We passed the Barrier and crossed the Abukuma River. On our left, the peak of Aizu soared up high; on our right, the districts of Iwaki, Sōma and Miharu stretched out; behind us, the range of hills that separated the provinces of Hitachi and Shimotsuke. We passed Kagenuma [Shadow Pond], but the sky was overcast that day, and so there were no reflections.
At the post town of Sukagawa, we visited a poet called Tōkyū, who put us up for four or five days. The first thing he asked was, ‘How did you feel as you crossed the Barrier at Shirakawa?’ I replied that the hardships of our long journey had exhausted me in body and spirit. Enchanted by the beauty of the landscape, and so much moved by the memories of the past that it awakened, I had not been able to compose a decent poem. Yet it would be a shame to let the crossing go unrecorded. So I wrote:

imagination’s birth!
a song for planting rice
in the deep far north
posted by kuni_san time: 9:46 AM

I like the idea of the map overlay. perhaps you could add the extent of the damage by quake and tsumani across the country?

I remember fondly walking most of these parts, the coast with pockmarks of former earthquakes ...

the nuclear disaster is more in the news here-

.
snow in my valley -
what are my poor neighbours
doing right now?

what with everything, like in Basho's unfinished poem 'my dreams keep revolving'

My prayers go out to the 50 heroes of Fukushima. And to the brave helicopter crews preparing to drop water on the reactors in a desperate attempt to stop the situation deteriorating even further.

www.youtube.com/rt reports from Japan and also the Russian east coast.

I started reading Matsuo Basho's 'A Narrow Road to the Deep North' a week before the Tsunami, and today I was in for a shock when I saw Fukushima mentioned.

More than any aerial photos, it brought the sense of loss in a razor-sharp focus.

Thank you all for nice comments.
The reason I posted this map is that most people in the world are not aware of sise, relative distances, and geography of Japan Islands.
For haiku lovers, Basho's journey is well know so I used its map to convey the geographical sense.