Haiga 549 Matsushima, then and now 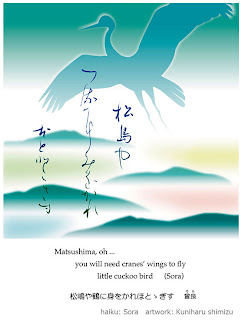 Now, after the earthquake and tsunami

Matsushima islands are known as one of three best scenic spots in Japan, and also have been the inspiration for many poets and artist through out the history of Japan.

Matsushima isles are a bit north of Sendai city, and could not escape the attack of the earthquake and tsunami. I did some web-search to find out the extent of the damage. Though there is limited news about it, it is clear that the damage is pretty extensive. Many islands were bathed by the tsunami, lost beautiful pine trees, Island rocks collapsed.

I happened to find a tweet by a person living in Sendai. She says that despite the damage, Matsushima will recover soon, and is a beautiful place so please visit there.
posted by kuni_san time: 11:32 AM

Matsushima -
the sun
and the sky, so blue.


I remember Matsushima clearly from my visit in 02. We took a tour boat around the bay, every rock jutting from the water seemed like a treasure. I photographed the temple, in the photo above. I hope the recovery will not be long. This is a very beautiful place...the land, the people, the sights and sounds and the smell of foods wafting into the streets.

I was with Deborah, and I am shocked out of words, so thank you Deborah.