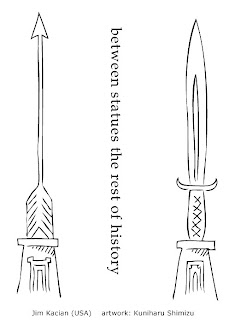 Haiku by Jim Kacian. Artwork by myself.
Yet another haiga for Anakiev's anthology.
This haiku can be said a typical of Jim'; he often writes haiku in this very simple manner. Simple yet quite condensed, and I like his style. For the haiga, I tried to reflect his style, and to convey its content in simple visual form.

I am in Tokyo again, in rainy Tokyo. I had a lunch with my acquaintance in Nakano area(a little west of Shinjyuku). He said that in this area, there was a shopping mall called "Broadway", which enhouses numerous shops for the "Otaku(nerd or geek)" of various kinds, and is older than Akihabara as far as the mecca of Otaku is concerned. Intriguing.
posted by kuni_san time: 5:10 PM