Haiku by A.C. Missias, Joann Klontz, and paul.m. Artwork by myself.
There is linked haiku, so why not linked haiga. I made each one of the haiga some years ago, each written by different haijin at different times and place, not meant to be linked. I have a reason to have them linked together, but the reason is pretty subjective, more like a feeling, and difficult to express in words.

Putting them together necessitates some adjustments of colors, of composition, and of determining focal point so the three become one, or visually linked. 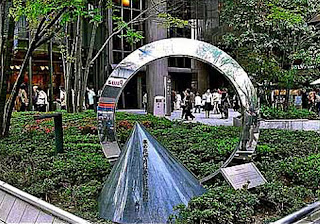 I was out to Kobe and Osaka yesterday. In Osaka, near Umeda Train Station, I found this monument. This frontal image is repeated in the back as in a mirror.

At the first glance, it appeared as a modern sculpture, but I found a Buson's haiku engraved on the triangular stone, the famous haiku about the rape field and sun and moon. According to a little board on the side, in the olden days, when Buson wrote the haiku, this area was a stretch of wide rape field.

Haiku monuments are usually made with natural stone. This one is done with very new approach, not only the materials used (Polished and shaped stone and stainless steel), but it expresses the poetic content of Buson's haiku in sculptural form. This approach coincides well with the way I make my haiga. I liked the monument instantly.
posted by kuni_san time: 8:43 AM