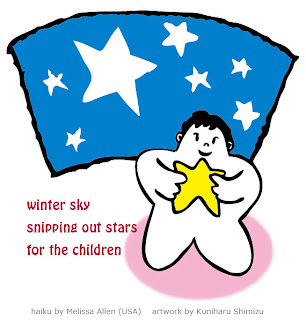 Haiku by Melissa Allen (USA). Artwork by myself.
Melissa san sent me some haiku. One of them became haiku this morning so I am posting it now.
The shape of the star is almost universal, five-pointed or sometimes six pointed. It is actually the abstraction of the star light rather than the star itself. The stars are round like the sun, earth, and moon. The pointed shape of stars are so familiar that I am sure there are some small children who believe that the stars are all in pointed shape.

Whatever the shape is, the star is like a symbol of hope. Considering the gloomy states of the world, we grown ups need to make sure there are enough stars left for the children.
posted by kuni_san time: 12:59 PM

delightful! love the haiku and the artwork :-)

Kuni-san - Thank you for this wondrful haiga. How wonderful to pass on the love of the night sky to our children... the incredible dynamics of the universes and the way of light in the darkness. Merrill

Thank you all for nice comments. For small people, so many things in this world are wonder.