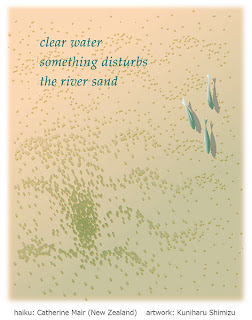 There was an earthquake in New Zealand, and now here in Japan, a lot bigger ones. Many aftershocks follow.

It's been a month now, but the aftershocks continue to occur. While I was in Tokyo from 9th through 11th, I felt them often. They get really spooky when lying on bed. Otherwise, life in Tokyo has returned to almost nomal, no more lining up for the daily needs, no controled bkackout, and such.

About a hour and half after I left Tokyo on Shinkansen (bullet train), yet another aftershock occured, killing electricity in some areas, disrupting train schedules and such. My train was already far away then so it did not stop, and I was able to return home safely.
posted by kuni_san time: 1:37 PM

Nice to read the note and you see back, Kuni-san,

disturbance is usually a sign of life....but these days it really have been upsetting/terrifying,

Devika san, thank you for your concern.

always, Kuni-san...and in Northeastern parts here too we have been experiencing minor earthquakes,

Catherine would love this. I will email her the link.
Glad to hear you are safe.
Kirsten
http://kirstencliffwrites.blogspot.com/