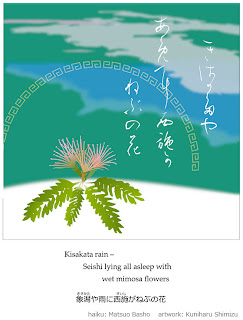 Haiku by Matsuo Basho. Artwork by myself.

After having visited Matsushima, Hiraizumi, Basho crossed the mountains and reached the Japan Sea side. His intention was to visit Kisakata whose beauty then equaled that of Matsushima. Looking at the sight before his eyes, Basho, who loved old Chinese literature, remembered Seishi, a beauty who led unfortunate life, and wrote this haiku.

In his "Narrow Road to the Deep North" Basho wrote:
[Kisakata]......As we sat in a room at the front of the temple and rolled up the screens, the entire landscape unfolded before us. To the south, Mount Chōkai propped up the sky, its image reflected in the water. To the west, the Muyamuya Barrier blocked the road. To the east, the road to Akita stretched out on an embankment far into the distance. To the north was the sea, whose waves broke into the lagoon at a place called Shiogoshi [Tide-Crossing]. Kisakata, which is little more than two miles long and wide, reminded me of Matsushima; but there was a difference. Whereas Matsushima seemed to smile, Kisakata had a gloomy, bitter air. The lonely, melancholy scene evoked a troubled human soul:

Kisakata went through a big topographical change by the 1804 earthquake, 175 year after Basho praised its beauty. Kisakata now is mostly farm lands. Beautiful small islands only remain as mounds here and there. 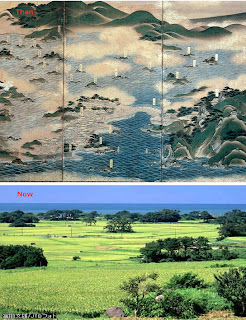 I love your info posts, with maps and photographs. Would love to see more photos of your studio, you in action, and at exhibitions too. ;-)