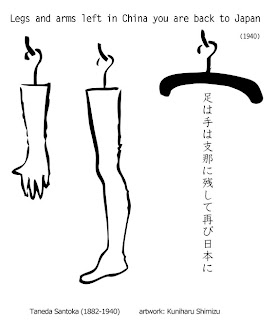 Haiku by Taneda Santoka. Artwork by myself.

My blog, Blogger, was down almost all day yesterday. They said it was because of maintenance, but the real cause maybe something else, like hacking. Blogger is part of the mighty Google so likely to become a target. What happened to Sony recently shows there are skilled people out there to do mischief.

Santoka wrote about a deplorable condition, and he wrote it in such a way that much of its appreciation rested on the reader. Many images came and went in my mind as I tried to make this haiga. A true haiku way, indeed. This haiga will be included in Dimitar Anakiev's anti-war haiku anthology.

I met a free-verse advocate at World Haiku Association gathering. He is one of the key figures in the genre. According to him, recent free-verse haiku are not as powerful and profound like ones by Santoka, Hosai, Sumitaku, and such. He is all for putting in some shock treatment for the genre.
posted by kuni_san time: 8:22 AM

yes, very intriguing, and stirring haiga, Kuni-san....it does take the mind to many places...and i'm in super awe by the artwork you did for it...no words to describe :)

yes, Blogger was down -- i thought it went crank :)

and on free verse haiku -- it interests me because i am always interested to see how the genre goes,

It reminds me of my longer (ekphrastic) poem:
The Searchers