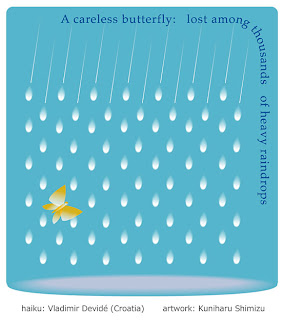 Haiku by Vladmir Devide of Croatia. Artwork by myself.

I exchanged a few correspondences with the late Devide san. One time I made big printouts of the haiga I made for his haiku, and sent them to him. In return he sent me a few haiku books, including a big color book. Devide san's wife is a Japanese. I once saw them on a TV documentary broadcasted in Japan, which was about haiku people in Balkan areas. Devide and his wife appeared to me a good loving couple.

The tyhoon rain seems to have stopped this morning here, but the clouds are still pretty heavy. People walking on the street are taking umbrella along. Small insects, however, are sometimes careless and venture into the poring rain only to be slapped down on the ground.

I heard that when the tsunami was approaching, quite a few people actually went out to the pier or seaside to watch the wave. How careless I thought, but I guess that is what happens when one underestimates the real power of the nature. Being curious and being careful are both the working of the mind. It makes a big difference which working one chooses in time of danger. I certainly choose not to be a careless butterfly.
posted by kuni_san time: 8:58 AM

This reminds me of a wonderful poem by Berthold Brecht: "The one I love told me that he/she needs me. That's why I take care of myself, watch my way and being concerned about every raindrop striking me dead ..." (source of translation: http://slehmann.de/photoblog/index.php?showimage=128). In my eyes haiku and image are of great quality - and the haiga itself shines even more then the sum of the parts.