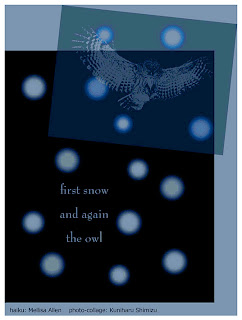 Haiku by Mellisa Allen. Artwork by myself.
I did some debating myself when i was making this haiga: should the owl be staying still, perched on a branch or something, or flying with its wing widely spread? Considering the mood of the haiku, the former seemed likely, but visually not so dynamic and interesting. Thus I chose the later idea. The resultant haiga is just an interpretation of the haiku.

I tweeted a few things about haiga-making last night.
"As a visual artist, I can contribute so much to haiga, and in return, haiku trains me to concentrate and focus"
"Haiga is a kind of game in which your creativity is challenged. It may become a good art education tool"
"On haiga, you can test your creativity in drawing, painting, photography, calligraphy, illustration, graphic design, and so forth"
posted by kuni_san time: 8:57 AM

Thanks.
This haiku is a challenge to the visual artist.

Kuniharu, I am always so thrilled when I discover you have made another one of my haiku into an amazing piece of art. This one is absolutely beautiful. I love the design -- the geometric arrangement of the "snowflakes" with the ghostliness of the owl.

I really admire how many different styles of artwork you use in your haiga. You are always experimenting and playing and learning ... an extremely valuable quality in any artist!

Melissa san: you are surely wordy, but good wordy. I appreciate your comments.

Terri san: Thank you for your comment.
I visited your blog. I like the pill bug haiga ( http://p.tl/vsst )
Would you like to try WHA Haiga Contest? (http://www.worldhaiku.net/haiga.htm )